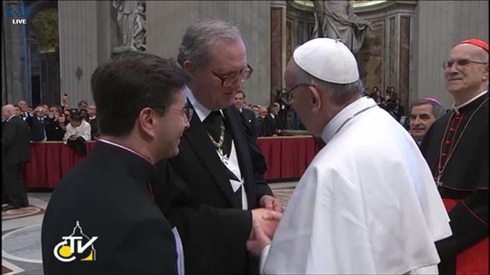 Over 200,000 of the faithful gathered in sunshine in St.Peter’s Square to participate in the inaugural Mass of Pope Francis. The Grand Master, Fra’ Matthew Festing, who holds the rank of cardinal in the Catholic Church, attended, accompanied by the Order of Malta’s official delegation. More than 130 official delegations were present.

The Holy Father addressed the world, declaring the importance of: “Protecting people, showing loving concern for each and every person.

“Let us never forget,” he said, “that real power is service…to the poorest, and the weakest.” Pope Francis chose care and protection as the key themes of his homily, stressing the need to show each other “loving concern for each and every one, especially children, the elderly, and those in need, who are often the last we think about.

We are the custodians of each other

“I would like to say to all those who have positions of responsibility in economic, political and social spheres, and all men and women of goodwill: we are the guardians of creation, the plan of God inscribed in nature, the custodians of each other, and of the environment. Do not let the signs of destruction and death accompany the journey of our world! But in ‘guarding’ we must also look to ourselves,” said the Holy Father. “We should not be afraid of goodness, nor of showing tenderness.”

Following the joyous celebration, the Grand Master and members of the Sovereign Council of the Order of Malta paid homage to the new Pope, who greeted the heads of State assembled for the inaugural Mass in strict alphabetical order.

The doctors and nurses from Order of Malta’s First Aid post in St.Peter’s Square, which is kept busy all year round providing free medical care to pilgrims in need, were on standby and supervised the area around the Basilica, together with almost 700 volunteers. They were joined by 46 volunteers from the Italian Emergency Corps of the Order of Malta (CISOM) who also offered medical assistance, two ambulances and a specialised referral medical post.