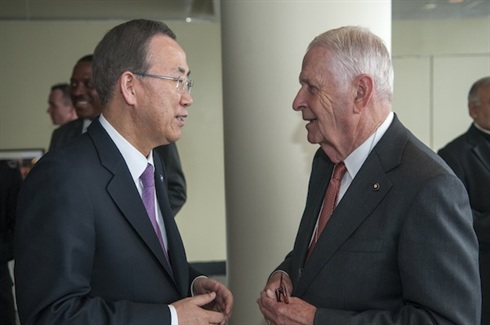 The Order’s Ambassador to the United Nations in New York, Robert L.Shafer, welcomed the UN Secretary General Ban Ki-Moon and Under-Secretary General Wu Hongbo, among the many diplomatic guests at a special reception at the Order’s Embassy to mark the 900th anniversary of the Pie Postulatio Voluntatis. The Apostolic Nuncio, Archbishop Francis Chulikatt, also attended.

In his response to Ambassador Shafer, the Secretary General noted that “the Order of Malta has always been the UN’s faithful ally in achieving the Third Millennium Goals,” and thanked the Order for its “constant commitment to serving the poor and needy.”

The setting for the reception was an exhibition of the Order of Malta’s activities from its origins, including a reproduction of Pie Postulatio Voluntatis, which was promulgated by Pope Paschal II in 1113 exactly nine centuries ago, laying the legal foundations for the Order of Malta’s sovereignty and independence.