In churches around the world, members, friends and volunteers of the Order of Malta marked St John’s Day – the feast day of the patron saint of the Order – with a solemn Mass and celebrations.

In London, the President of the British Association, Richard Fitzalan Howard, and the Grand Prior of England, Ian Scott, greeted the British members of the Order family at a service in the Brompton Oratory. The celebrant was the Right Reverend Alan Hopes, Bishop-Elect of East Anglia and Conventual Chaplain ad honorem and the homily was preached by the conventual chaplain of the Grand Priory ad honorem, the Reverend Antony Conlon, who reminded that the work of the Order is rooted in a proud tradition to care for society’s marginalised, a work that is as necessary today as it was when the Order was founded almost a thousand years ago. 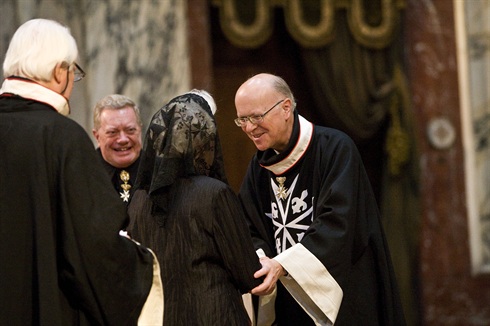 President and Grand Prior greet an honoured member

The occasion also celebrated the conferring of decorations on special members of the congregation, all of whom have offered particular and dedicated service to the Order in Britain – through their work with sick pilgrims at Lourdes, at the St John’s Hospice in North London, in the care homes run by the Orders of St John Care Homes Trust across four counties and in many quiet ways – and who have gone about the Order’s mission to care for the poor and the sick with exceptional commitment.