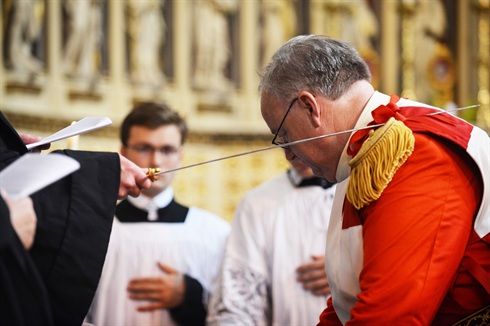 Fra’ Julian Chadwick made his Solemn Profession as a Knight of Justice in the Sovereign Military Order of Malta in The Oxford Oratory on 6 July, vowing his allegiance to the Church and his commitment to caring for those in need.

The profession, made before the Grand Master, Fra’Matthew Festing, took place during High Mass, celebrated by Dr Antony Conlon, chaplain of the Grand Priory of England. The very moving homily on the character of the religious was delivered by Fr Ronald Creighton-Jobe.

The Mass setting was Palestrina’s Missa Papae Marcelli. A new piece of music, the Alleluia, was composed for the day by Andrew Knowles. It will add to the canon of Music written for the Order which includes pieces by the Grand Master’s 18th century ancestor Michael Christian Festing. The stirring ceremony closed with a splendid Te Deum.

The ceremony of solemn profession has a long and symbolic tradition in the Order of Malta: before the Mass the sword is blessed and the knight is instructed to use it to guard both his own person and all enemies of the Christian faith.

A Knight of Justice takes the three monastic vows of poverty, chastity and obedience. The new knight is given golden spurs for his feet to demonstrate his contempt for worldly wealth and a belt as a sign of the chastity to which he is now vowed. The Grand Master strikes his shoulder with the sword three times, and in response the knight brandishes the sword aloft three times to demonstrate his willingness to defend his faith.

There follows the ceremony of clothing, as a reminder that this is a religious profession. The knight makes his solemn vow, becoming a full religious member of the Order. By ancient custom, his first act of obedience to the Grand Master is to take the Missal to the altar, and then to bring it back. His second order is to recite the Office each day. He is given the habit, and vested in the stola bearing images of Christ’s Passion.