Remnants of the Knights’ 1000 year-old hospital discovered in Jerusalem 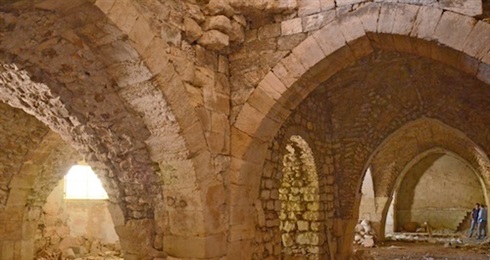 A recent find in the Old City of Jerusalem has unearthed the ruins of what is now considered to be the knights’ hospital of 1000 years ago.

The exciting discovery has revealed details of the probable of the building and confirms what has long been surmised about the construction itself. What has emerged is a strong image of the hospital and of the activities of the knights hospitaller.

The excavation has exposed part of an enormous structure, which was a busy hospital dating to the period between 1099 and 1291. The building is currently owned by the Waqf* and is situated in the heart of the Christian Quarter in the Old City of Jerusalem, in a region known as Muristan (a corruption of the Persian word for hospital), near David Street, the main road in the Old City.

The works, authorised by the Israel Antiquities Authority, expose parts of a structure which seems to extend across an area of fifteen dunams**. It is more than six metres high and reveals a great hall composed of pillars and ribbed vaults, rooms and smaller halls.

Contemporary historical documents, most of which are in Latin, mention a sophisticated hospital that was as large and as organised as a modern hospital. The Israeli Authority, in publicising the exciting findings, comments that ‘The hospital was established and constructed by a Christian military order of monks named the Order of St. John of the Hospital in Jerusalem and known by its Latin name the Hospitallers (from the word hospital). They took an oath to care for and watch over pilgrims, and when necessary they joined the ranks of the fighters as an elite protective unit.’

The creation of a tradition: care for all, with total impartiality

The findings and the early sources provide considerable detail, much of which we already know: the hospital had different wings and departments depending on the nature of the illness and the condition of the patient – similar to the arrangements in a modern hospital. In an emergency the hospital could accept as many as 2,000 patients. Our Hospitallers treated sick men and women of different religions with respect (‘Our Lords the sick’- our proud motto). An example: Jewish patients received kosher food – a demonstration of our long tradition of care for all, with total impartiality, no matter who they are nor from whence they come. The Muslim Arab population was instrumental in assisting the knights in establishing the hospital and teaching them medicine. Arab culture has always held the medical profession in high regard and Arab physicians were famous far and wide.

The sources also note that, in addition to the medical departments, the hospital also functioned as an orphanage where abandoned newborns were brought. Mothers who did not want their offspring would come with covered heads and hand over their infants. In many instances when twins were born, one was given to the orphanage. The orphans were cared for devotedly and when they reached adulthood they could serve in the hospitaller order.

In later years, the Ayyubid ruler, Saladin, lived near the hospital following the defeat of the monks, and renovated and maintained the structure. He permitted ten monks to continue to reside there and serve the population of Jerusalem.

The edifice collapses in the 15th century

In the Middle Ages parts of the structure were used as a stable and the bones of horses and camels have been found in the excavations, alongside a great deal of metal used for shoeing the animals. In 1457, the building collapsed in an earthquake and was buried.

The discovery was prompted by a planning permission requested by the Grand Bazaar Company of East Jerusalem to create a restaurant. They worked in cooperation with the Israel Antiquities Authority to carry out the excavations prior to the start of the new works.

* The granting or dedication of property in trust for a pious purpose. The current Waqf in Jerusalem is an Islamic trust which manages the Islamic edifices on the Al-Aqsa Mosque in the Old City.

**A dunam was a unit of land area used in the Ottoman Empire, representing the amount of land that can be ploughed in a day.