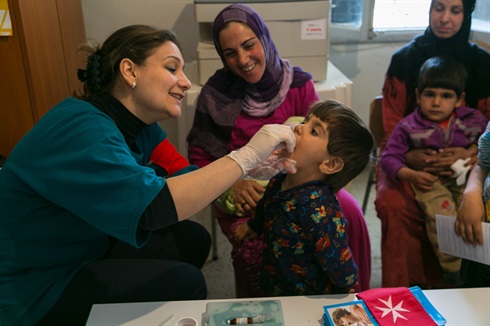 In the seven weeks since the British Association’s Foreign Aid Service (FAS) launched an appeal for Syrian refugees, over £40,000 has been raised, with contributions continuing to arrive daily.

The plight of the refugees remains. Arriving across borders in their hundreds, they need food, clothing, medicines and vaccinations. “There are many diseases, and a high risk of epidemics breaking out among the refugees,” says Miladia Hamati Aoun, a nurse at the Order’s socio-medical Khaldieh clinic in north Lebanon. The clinic is helping the most vulnerable Syrian refugee and displaced families – the majority are women and children, living with host families or in empty buildings or outside the refugee camps – as well as unregistered refugees. Social worker at Khaldieh, Rouba Azize, one of the coordinators of the emergency relief efforts declares: “People are living in basements, sleeping on cardboard on the floor. The hygienic conditions are horrendous and a threat to public health.”

From this month, two social centres in Bekaa Valley are also being supported.

The Order of Malta has been active in Syria, Turkey and Lebanon since August 2012, to date providing emergency aid for more than 30,000 people.

The Order of Malta projects in Lebanon: 10 socio-medical centres, 2 mobile medical units, 3 day care centres for the elderly and 7 ‘warm homes’, a centre specialised in cerebral-motor deficiency, a balneo-therapy centre, a hosting centre for the physically and/or mentally handicapped.

Please help by donating to the FAS appeal: www.justgiving.com/4-syria