Lampedusa: medical psychological teams from the Order of Malta seek to maintain calm among survivors and islanders

‘Everyone is in constant contact with a dramatic reality’ 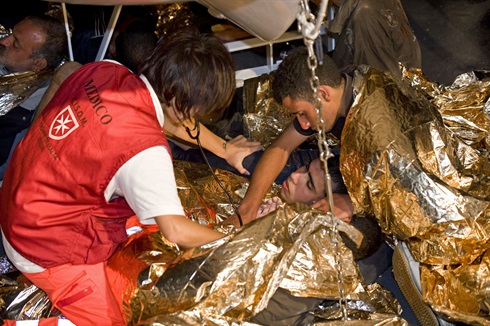 From ANSA, the leading Italian newsagency reports from the scene

‘It is difficult to keep emotions under control,’ the medico-legal helper tells us,’ as we understand that there are some things one is unable to talk about. It is not that one is insensitive, but the shock is deep.’ Andrea Grande is the doctor in charge of the emergency medico-legal team DVI (Disaster Victim Identification) of the police force, with the task of bringing together the bodies of the victims of the boat disaster off Lampedusa: in a team of 30 they have been working without a break since Thursday evening, when the first victims arrived at the local aircraft hangar, now transformed into a temporary morgue. 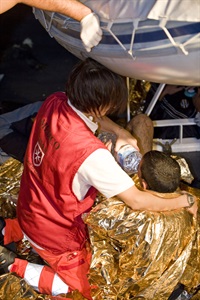 ‘These are emergency situations which call for instant action,’ says Dr Grande, with 22 years’ experience as a medico-legal expert. Only one’s professionalism helps one to stay calm at a time like this.’ Where do he and his team find the courage to choose this kind of work? ‘It’s not courage,’ he says, ‘it’s a way of understanding things. But sure, it is not without its difficult moments.’ For him, that moment came when they had to close the coffins over four small children, pulled lifeless from the sea. ‘It was very, very difficult.’

And it has been very hard for everyone involved in these tragic days, working in the hangar, hearing the cries of desperation of the survivors. Matteo Simone, psychologist with the Italian Emergency Corps of the Order of Malta (CISOM): ‘Encounting those who have survived is a difficult moment,’ he explains, ‘even when this is a task one is used to.’ CISOM has been working on Lampedusa for some time with a team of doctors, nurses, psychologists and first-aiders: the Corps’ health workers are the teams who go aboard the patrol vessels of the Italian Coast Guard, giving first aid to every migrant who has need of it.

‘When we intervene,’ Matteo says, ‘our first task is to monitor everyone who needs care, starting from our own volunteers, the police force, the first-aiders and the local population.’ Psychologist Francesca Longinetti adds: ‘We are all medical professionals, working closely together, doctors and nurses, linking in to the other units of the Corps, so that when there are particular problems we can keep each other informed and support each other. The aim now is to avoid panic attacks among the survivors and the local residents by keeping a careful watch on any developing signs of stress, as they are all in constant contact with a dramatic reality which can easily degenerate into something with very serious implications.’ One of the responsibilities of the team involved in the temporary morgue is to keep under observation the reactions of the workers who are identifying the bodies. ‘We keep up a conversation with them, to relieve the tension of the situation. And this way we can check if there are problems and if we need to intervene. If so, we can work with individuals or groups and we can review performance later when the emergency is over.’
(ANSA – translated from the Italian)