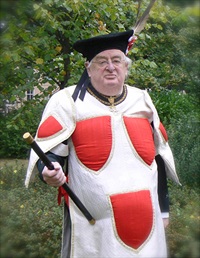 The death has occurred in Edinburgh after a long illness of Peter Drummond-Murray of Mastrick, Bailiff Grand Cross of Honour and Devotion in Obedience, a most distinguished former Chancellor of the British Association of the Order of Malta.

As a highly capable administrator for the Order’s growing membership and involvement in charitable activities, he encouraged the Order ’s involvement in care homes in Britain – there are now 77 – and established the Scottish Delegation of the Order. His authoritative researches as a genealogist, and his ability as an author and editor in this chosen and much loved subject, also meant he was sought after from far afield.

A genealogist, an expert on Order history and traditions, former company director and stockbroker, Peter Drummond-Murray was a man of firm opinions, with a deep commitment to the Order, an encyclopaedic knowledge of genealogy and heraldry as well as history, an author and an editor, all brought together with an acute sense of humour enjoyed by his wide circle of friends, who read his many and varied missives over the years with great delight. These communications were written in splendid calligraphy with a broad black nib; undaunted by the arrival of the computer, Drummond-Murray simply transferred his inimitable style into a large type, bold online copperplate font.

His recent decoration as Bailiff Grand Cross, which recognised a lifetime of devotion and commitment to the Order of Malta, gave him great pleasure, as it did his many friends. His own personal, unsung works to help those in need were carried out with humility and modesty.