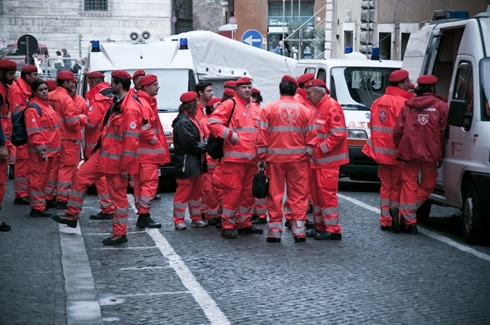 Volunteers of the Order of Malta’s Italian Relief Corps in Via della Conciliazione, Rome

Heads of state and governments from all over the world,
including the Grand Master of the Sovereign Order of Malta, Fra’ Matthew Festing, have taken part in the historic occasion of the canonisation of two popes, John XXII and John Paul II.

Pilgrims in their thousands have flocked to St.Peter’s
Square, 2500 police officers and 2500 volunteers have been mobilised, with the Sovereign Order of Malta’s volunteers among them, ready to provide medical assistance and first-aid to the pilgrims.

The Sovereign Order’s first aid post in St.Peter’s Square,
operative 365 days a year and staffed with doctors, nurses and specially trained emergency personnel, has drafted in extra volunteers for a 48-hour non-stop service, with five posts around the Square, offering rapid intervention via radio links.

A combination of personal emotion and professional commitment

For this weekend, additional support comes from the Order of Malta’s Italian Relief Corps (CISOM). They have also included a special delegation of volunteers from the Order of Malta’s Polish Association. The Relief Corps has been operating in the areas outside the Square and in Via della Conciliazione, on-duty tasks running non-stop from 8.30 on Saturday until 20.30 on Monday 28 April.

‘We are honoured to offer our service once again at a historic
religious event,’ says Mauro Casinghini, National Director of the Order of Malta’s Italian Relief Corps, ‘as we did for the funeral of John Paul II in 2005 and his beatification in 2011. In ensuring first-aid services for the faithful, for all of us it is a combination of personal emotion and professional commitment.’