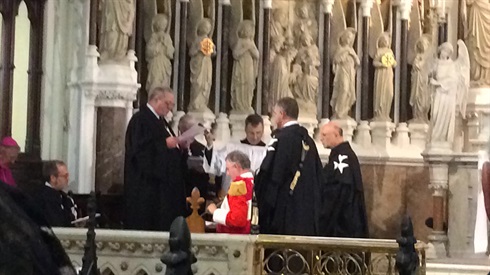 On the most important day for the Order of Malta in Ireland since the 16th century, a ceremony of Solemn Vows was celebrated as the packed congregation heard Fra’Paul Caffrey make his promises to Grand Master Fra’Matthew Festing. Dr.Caffrey, an art historian with expertise in eighteenth and nineteenth century Irish art and design, is the first professed Irish knight for 474 years. His promise is to live according to the three monastic vows of poverty, chastity and obedience.

The ceremony attested to a constant throughout nine centuries – the mission of the Order of Malta – the love of God and the love of one’s neighbour (tuitio fidei et obsequium pauperum). This mission comes from the founding knights of the Order in Jerusalem in the 11th century. Their work throughout history to care for those in need has led Pope Benedict to describe their help as adding ‘radiant pages to the annals of Christianity’.

The service included a specially commissioned piece of sacred music, composed by the Community of the Silverstream Priory, and sung by the Lassus Scholars.