Iraq: Grand Master appeals for an end to religious discrimination

Violence and religious discrimination in Iraq cause acute concern 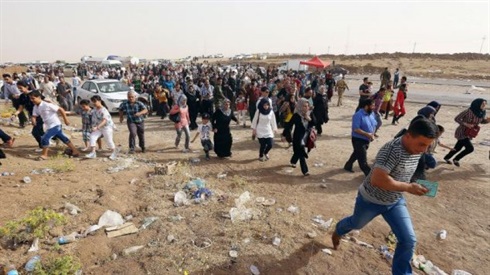 The news from Iraq of violence and religious discrimination, leading to the flight of tens of thousands of Christians from the north of the country, has created a tragedy which has assumed humanitarian proportions.

Pope Francis has added his condemnation of the tragedy, calling on the international community do more to exert pressure and bring the persecution and the humanitarian drama to an end.

The Grand Master of the Sovereign Order of Malta, Fra’ Matthew Festing, has declared his ‘deep and serious concern’ at the events in recent days. In declaring it an ‘unacceptable persecution of the Faith,’ he has requested the members and volunteers of the Order of Malta to pray for the Iraqi people and for an end to violence and religious discrimination.

Over 200,000 have fled in recent weeks due to the advances of IS, the self declared islamic states of Syria and the Levant. The United Nations Assistance Mission for Iraq (UNAMI) reports that the majority of the refugees belong to religious minorities. The UN mission described the situation in northern Iraq as ‘desperate’, a ‘humanitarian tragedy’, ‘a matter of life and death.’

The conflict has intensified around Qaraqosh, the main Christian city in Iraq. Its surrounding areas have been overrun by IS militants. The Chaldean Patriach, Louis Sako, who heads the largest Christian church in Iraq, confirms: ‘In these days, 100,000 Christians have fled on foot in the clothes they stand up in, heading towards Kurdistan. It is a humanitarian disaster: the churches have been occupied and their crosses torn down.’