Making history: First member of the Order of Malta to take solemn vows in the Holy Land since the 13th century

600 years after the Order of Malta left the Holy Land, another chapter begins 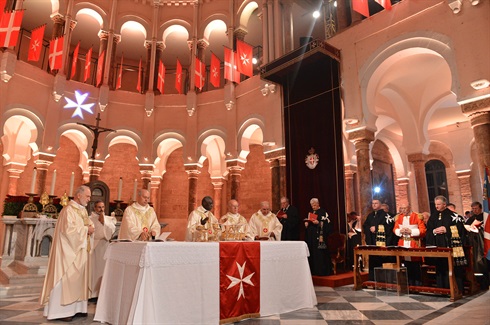 The special Mass was celebrated by His Eminence Cardinal Robert Sarah, President of the pontifical “Cor Unum”, and the Apostolic Nuncio in Lebanon, Monseigneur Gabriele Caccia, in the presence of the Grand Master of the Order, Fra’Matthew Festing, HE the President of the Lebanese Association, Marwan Sehnaoui, and a large congregation of distinguished guests, members, family and friends.

The meaning of the symbols

The Grand Master received the vows of the new Fra’ (brother), explaining the symbolism of the ceremony: a sword given to the new Professed knight to represent his protection of his faith; spurs for his shoes, to spur him on to greater efforts in his service to those in need; and a stola, traditional in religious ceremonies and here representing the yoke of St John Baptist, the patron saint of the Order and the Passion of Christ.

Beirut: Making the Solemn VowsThe occasion was of particular moment, as Pope Francis will institute the Church’s ‘Year of Consecrated Life’ on November 30th, the first Sunday of Advent.