Order of Malta organisations around the world, rescue corps and volunteers unite to highlight the global drama and propose more constructive approach 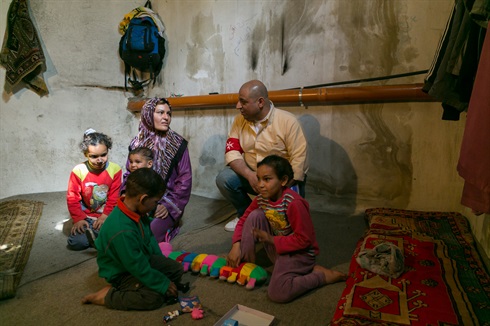 Syrian refugees in Order of Malta centre in Lebanon
Grand Chancellor of the Order calls for action: click here for his recent interview

New forms of cooperation between countries of origin and refugee destinations are called for in a strongly worded initiative by the Sovereign Order of Malta, a prominent provider of care to the displaced for over 20 years. “Present policies are not working and they place refugees at risk,” warns Albrecht Boeselager, Grand Chancellor of the Order, who has 25 years’ experience of running the Order’s international relief operations.

“The drama of refugees will not cease over the coming decade. It is no use erecting walls and barriers,” he adds. “Faced with this drama and the desperation of millions of people, we now have to adopt new humanitarian assistance schemes, new forms of cooperation with the countries of origin and which also take into account the asymmetric wars currently being fought by forces that do not represent states.”
An international symposium on this key concern held by the Order in Geneva last month identified both points of failure and constructive approaches. Delegates of major agencies including the UNHCR and representatives from a range of United Nations and international aid organisations, as well as faith-based organisations, including KAICIID (King Abdullah Bin Abdulaziz International Centre for Interreligious and Intercultural Dialogue) and CAFOD (Catholic Agency for Overseas Development), agreed on the urgent need to promote cooperation between states and international organisations.

The Order will now lobby both for cooperation and for specific policies via its diplomatic representation with over 100 countries and through participation in the forthcoming World Humanitarian Summit, to be held in Istanbul next May, as well as at the preparatory meetings in Geneva this autumn.

The number of refugees and displaced persons worldwide has reached levels not recorded since the end of World War II. In Syria, over four years of conflict now mean that a family is forced to leave home every 60 seconds. It is calculated that every 3 seconds a person becomes displaced in some part of the world. Over 50 million people are in flight from disasters, wars and famine. Half of them are children.

Some 17 million are refugees, over 33 million are internally displaced – that is, forced to leave their homes although staying in their country – and about 1.5 million are asylum seekers. In 2014, there were 866,000 new asylum applications in the industrialised countries – the majority were Syrians followed by Iraqis. Numbers that reflect a world in flames with burgeoning new crises and old trouble spots flaring up.

World Refugee Day, established ten years ago by the UN General Assembly, will be celebrated on Saturday 20 June 2015. This year, the Sovereign Order of Malta is launching a campaign in the many countries where it is present, to raise public awareness of this worldwide drama. All the Order of Malta’s organisations will draw attention to the world refugee problem through social media and information channels.

Present in 120 countries with 80,000 volunteers, 33 Rescue Corps, a worldwide relief agency – Malteser International, 59 organisations worldwide, and an established diplomatic network with over 100 countries, the Sovereign Order of Malta is on the front line offering assistance to refugees and displaced people, both in the countries involved in the conflicts and in the final destinations of asylum seekers.