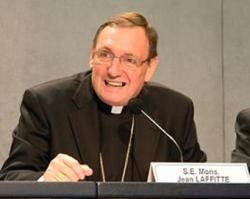 In welcoming Monsignor Laffitte, the Grand Master of the Order Fra’ Matthew Festing acknowledged with great warmth the work and dedication of the retiring Prelate, Monsignor Angelo Acerbi: “It is with the deepest gratitude that I thank Monsignor Acerbi for his dedication and commitment over these 14 years and for the strong spiritual guidance he has given the Order. And I extend to Monsignor Jean Laffitte a most cordial welcome and good wishes for the work he now undertakes with us.”