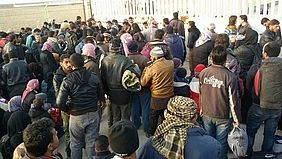 Syrian refugees flee AleppoAs tens of thousands of refugees flee Aleppo along the highway to Turkey, advancing Syrian government forces jeopardise delivery of humanitarian aid. Malteser International, worldwide emergency agency of the Order of Malta, has been providing tents, blankets and supplies, with a Syrian partner operating medical facilities in the region. The staff risk their lives every day.

Conditions in the areas under siege are very poor indeed and increases in international funding are desperately needed. Aid organisations need unhindered access to the region. However, “Humanitarian aid cannot be a substitute for decisive political action,” stated Malteser International’s number two, Sid Peruvemba, at the weekend. “The suspension of peace talks in Geneva means that the chance of a political solution to the conflict remains extremely small.” 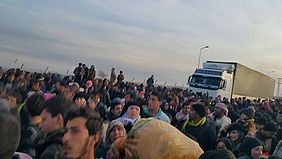