Young English group on pilgrimage to Rome: the Easter message of hope 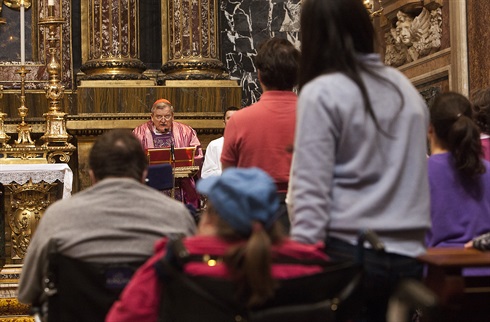 Twenty six young people from the Order of Malta Volunteers (OMV) – eight guests and 16 volunteers – are on Easter pilgrimage to Rome. For most of them, it’s a first – a first time in Rome, a first Mass in Santa Maria Maggiore, one of Rome’s four splendid basilicas where the Order’s Cardinal Patronus, Cardinal Raymond Burke celebrated a special Mass for the group, a first visit to the Order of Malta medical post in St Peter’s Square, a first meeting with the Order’s Grand Master, Fra’ Matthew Festing. The Order of Malta’s Cardinal Patronus, Cardinal Raymond Burke, celebrated Mass specially for the group in Santa Maria Maggiore.

‘Actually, I think I’m the oldest of this young group,’ jokes Robert Adamson, a retired civil servant, as he deftly negotiates the church steps in his wheel chair. ‘They are such fun to be with, friendly and caring.’ He describes his first visit with the OMV to Lourdes, how much he enjoyed it, and why he keeps coming back. ‘It was the attitude that was so good. My first visit was in 1986 and I’ve been almost every year since. That means that some of the volunteers are now the children of those who looked after me all those years ago. Lourdes is inspiring – and even the food has improved!’ 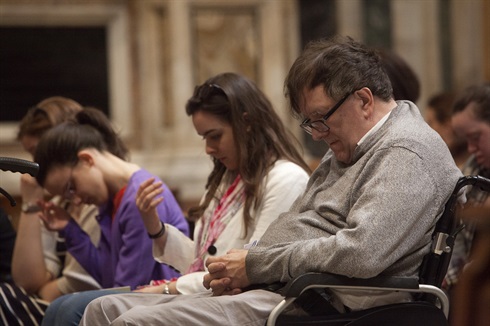 27-year-old Anna Zaloga has been with the OMV since 2011. She first heard about the group at school and has been with them to Lourdes, to Walsingham and to the international summer camps the Order runs every year in different European locations. ‘The OMV has helped me a lot,’ she says. ‘It feels like a family and I’ve met a lot of wonderful people.’ Helper Tom O’Neill agrees. ‘You build friendships, with our guests and the other volunteers,’ he says. ‘It brings out the best in people.’ Francesca Montgomery, who has been a volunteer for over six years, finds that the group unites young people in Britain.

Cardinal Burke, in his homily for the young group and their guests, declared: ‘Helpers and friends, God looks for our love, especially in our daily works, to do what is right and good. In Christ we find the strength for our suffering. Easter is a message of hope, that we share in a particular way the suffering of Christ and how to be redeemed.’

Fra’ Matthew Festing welcomed the young people, noting the importance of their actions in helping each other and those less fortunate than themselves, and their contribution to the life and work of the Order of Malta, whose mission is always that: to care for those in need, inspired by Christian traditions of charity.The pilgrimage, organised with great efficiency by Ruth Stanley, ably helped by Jack Straker, is now in its fifth year.

To know more about the Order of Malta Volunteers in the UK: www.omv.org.uk 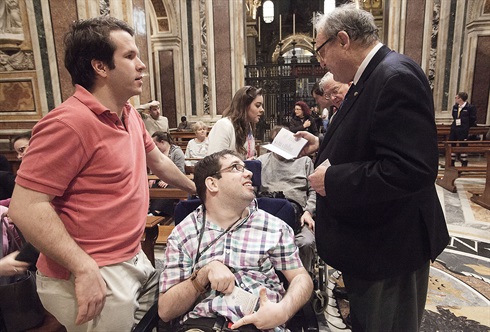