Mosul: trapped between the front lines without food or water

The Order of Malta’s worldwide relief agency, is providing aid to the IDPs 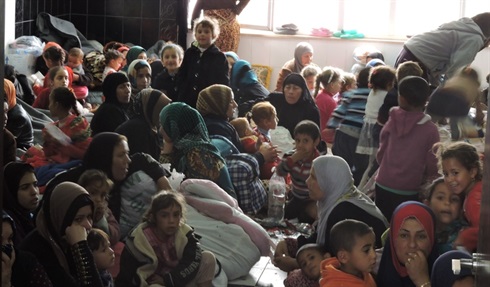 Thousands of internally displaced people (IDPs) are fleeing to safety from fighting near Mosul. On 26th March, around 2000 people arrived in the village of Makhmour, in Kurdish territory, after days trapped between the front lines without food or water. Malteser International, the Order of Malta’s worldwide relief agency, is providing aid. “The humanitarian situation here is catastrophic,” says Lisa Hilleke, Malteser International’s Liaison Officer in Erbil. “For security reasons, all the displaced are being kept in a single building with just 19 latrines. People are sleeping on top of each other. It is a potential breeding ground for diseases.” Humanitarian planners fear this wave of IPDs could be the first of many.

IDPs in a highly vulnerable condition

After living under ISIS rule for eighteen months, many IDPs are already in a highly vulnerable condition. Poor hygiene, a contaminated water supply, a lack of medication and vaccinations, and severe limitations on the availability of medical treatment in the ISIS-occupied zone have left them urgently in need of proper facilities and medical attention. Malteser International has provided two truckloads of hygiene materials to help improve conditions and reduce risk of illness. A coordination with local aid organisations and UN bodies, has provided a weekly mobile clinic run by Malteser International in cooperation with local partner organisation TCCF. “But a permanent solution is urgently needed,” Hilleke stresses.

Preparations are in hand in response to the fear that the IDPs who arrived in Makhmour last week are just the first of many thousands more. “We are monitoring developments in close contact with our local and international partners, and preparing ourselves to provide further aid,” says Hilleke. “Medical services are our top priority.”

Malteser International has been working in Iraq since 2004, undertaking a range of projects in the Kurdish Autonomous Region in the north. Since August 2014, the focus has been on providing medical services and emergency aid to IDPs and refugees.

Iraq: IDPs arrive in Makhmour in search of safetyMalteser International is urgently calling for donations to help the affected people:
www.malteser-international.org