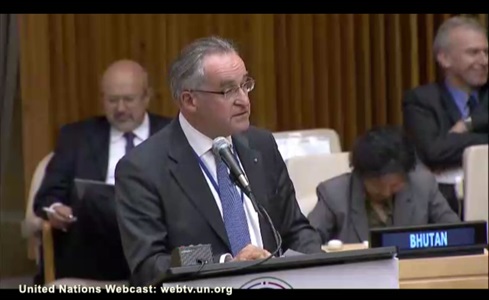 Secretary-General, Mr President, Excellencies, Ladies and Gentlemen, The question isn’t why do people migrate? They have always done so. But today’s migrations are an explosion of movements of peoples, an explosion of humanitarian problems. How can we, the international community, meet this challenge effectively (of over 244 Mio people on the move, over 65 Mio IDP and refugees and over 6 Mio stranded)?

The vocation of the Order of Malta, a sovereign and religious entity of public international law, has always been to care for society’s vulnerable. Today, in particular, the vulnerable we support are migrants and refugees – with aid along the Balkan route, housing and assimilation help in a number of European countries; saving lives in the Mediterranean and Aegean Seas; implementing development programs in the migration countries of origin.

At the Istanbul World Humanitarian Summit in May, the Order of Malta affirmed the commitments, summarised in the Outcome document: ‘to work differently to meet and reduce people’s humanitarian needs’. We emphasised that faith-based organizations and religious institutions have also a special role to play in the field of humanitarian assistance – for refugees, displaced people and migrants:

Therefore, we applaud the inclusion of the role of faith-based institutions in the outcome Document and Annexes of this High-Level Meeting.

We know that there are widely differing drivers of migration: war; religious or racial persecution; climate change; economic and social opportunities. These migration drivers demand global cooperation – a consistent, coordinated approach at both international and national level.

Politicians must take a responsible role and explain to their electorates the benefits of migrants and refugees as an indispensable resource for economic growth.

We call for development programs which must cover extended time periods, complemented by emergency aid for immediate suffering.

How can it be that in a world which produces 78 trillion dollars in GDP, we cannot together agree to allocate and administer 15 billion dollars for humanitarian aid, which is the target set by the World Humanitarian Summit?

Immediate action for refugees and migrants:

• To organise integration of refugees and migrants, so that they become an asset, (not a liability);

• To continue to save lives along the migration routes;
• To emphasise and foster respect for human rights;

• To draw attention to the living conditions in so-called ‘safe-houses’ in north Africa, which often include sex exploitation and slavery;

• To create work in the refugee camps for the adults and organise schooling for the bored and directionless young.

If we do not agree on these priorities as a united international community, we risk radicalisation through idleness, and a generation of millions of unassimilated and unskilled.

• Urgently, to open safe and legal paths to enter developed countries. (This does not mean indiscriminate admission);
• To work for cohesion of the industrialized countries on migration, developing resettlement, relocation opportunities and dignifying reception capabilities;

• To implement projects, in the migrants’ countries of origin and transit, to induce people to settle, (avoiding the risk of dangerous sea crossings);

• To discourage populist attitudes and policies of fear and consider how the international media could cooperate;

• To intensify the fight against traffickers and smugglers of human beings;

• To deal with migration as a foreign policy issue, not a border security issue.

What we are facing is but a beginning: from local migration to global, from global migration to massive country migrations. To be successful, we must challenge global indifference, fear, and economic selfishness. We, the Sovereign Order of Malta actively support this task of the United Nations and the international community to offer migrants and refugees a better world.

Together we MUST succeed.