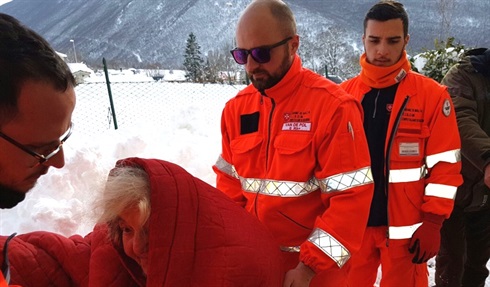 Teams from the Order’s Italian Relief Corps have arrived in Montreale, epicentre of yesterday’s four strong earthquakes, and where 400 tremors have been felt in 24 hours. Tasked with searching the outlying areas for the disabled and elderly trapped in their homes by the heavy snow, the teams have been able to bring them to the emergency shelter in Montreale and provide them with food, warmth and beds.

Since 24 August to date over 700 volunteers of the Order of Malta’s Italian Relief Corps have been deployed for the emergencies caused by the latest quakes in central Italy. They have assisted some 2,000 people housed in the sports facilities used as reception centres and have set up a field kitchen which has delivered 600 meals daily for a month. The professionals present included healthworkers, psychologists, first aiders in the red zone and technical staff dealing with formalities for the Municipal Operations Centre and operational plans as well as the distribution of food and medicines in the outlying districts of Amatrice, Muccia, San Severino Marche and Norcia.