Eye walk-in clinic in Jerusalem, where the Order’s first hospital was established in the 12th century 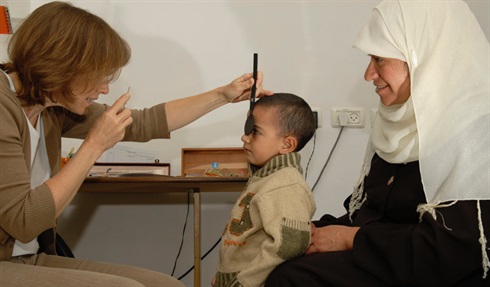 Layla is a 9-year-old Palestinian who enjoys playing and running in the open air. When she was 7, her parents – an almond farmer and a housewife from a city in the North West Bank – noticed she couldn’t see well. They took her to the local doctor who referred them to the St John Clinic in Anabta, the ophthalmic hospital located in Muristan Street, in the Old City of Jerusalem. She underwent surgery and completely recovered her eyesight which had been fading progressively due to a mature bilateral cataract.

In this same location in the 12th century the knights of Saint John of Jerusalem – today known as the Order of Malta – guided by founder Blessed Gerard established their first hospital, providing health care to pilgrims of all faiths arriving in the Holy Land. The hospital had different units depending on the nature of the illness and condition of the patient – similar to the arrangements in a modern hospital. In an emergency, the hospital could accept as many as 2,000 patients. The Order’s hospitallers treated patients of different religions with respect and dignity, whoever they were and wherever they came from.

Centuries later, the hospitaller tradition continues. This beautiful traditional building provides primary and emergency eye care for residents and tourists in the Old City. Many who live here are stallholders, who can rarely afford to travel long distances. The movement restrictions between the Old City and the outskirts of Jerusalem also make it hard for residents to move freely.
The clinic provides easy access to eye care whilst also addressing the problem of residents who cannot attend follow-up visits at the main hospital located in the outskirts of the city and which is wholly owned by the Most Venerable Order of St John.

In October 2016, the Holy Family Hospital, the maternity hospital in Bethlehem managed by the Order of Malta, signed an agreement with the Order of St John of Jerusalem to enhance the provision of eye care, with the opening of the walk-in clinic. The facility, managed by the British charity, is expected to see around 5,500 patients a year.

Around 33,000 Palestinians live in the Old City of Jerusalem. They face daily restrictions of movement to the outside section of the city. With the population increasing every year, there is no single ophthalmic service available within the walls of the city. The hospital is a member of the World Association