Pope Francis appoints his Special Delegate to the Order of Malta

Welcomed by the Order, Archbishop Becciu will work closely with the Lieutenant a.i 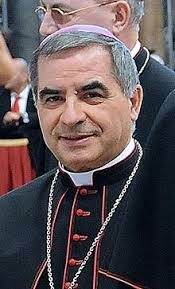 The government of the Order welcomes Archbisop Becciu and
affirms: ‘We look forward to a fruitful and constructive collaboration.’

As stated in His Holiness’ letter of 2 February 2017, the tasks the Archbishop will undertake  ‘everything related to the spiritual and moral renewal of the Order, especially the professed members.’ The Delegate will work in close collaboration with the Lieutenant a.i. and together they will be responsible for developing ‘a study in view of the appropriate spiritual renovation’ of the Order’s Constitution and Code.

Until his mandate concludes, which will be at the end of the
Extraordinary Chapter General which will be convened to approve the amendments to the Constitution, the Delegate will be the official spokesman in all relations between the Holy See and the Order of Malta.

Archbishop Becciu is Sardinian, a canon lawyer, and a former
Papal representative in a number of countries: Central African Republic, Sudan, New Zealand, Liberia, United Kingdom, France and the United States and Nuncio most recently in Cuba. In addition to his native Italian, he speaks English, French, Portugese and Spanish.