Conference with the diplomatic corps on government priorities 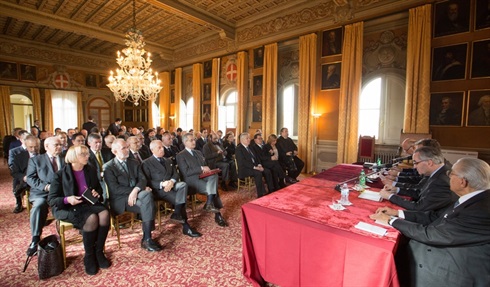 In conference with the accredited diplomatic corps

This morning the Grand Chancellor Albrecht Boeselager with the Grand Hospitaller Dominique de La Rochefoucauld-Montbel met the accredited diplomatic corps in the Magistral Villa in Rome to inform the participants of government priorities after the recent events involving the Order of Malta. Boeselager outlined what led to the resignation of the Grand Master Fra’ Matthew Festing on 28 January . “Our attention is now focussed on our extensive diplomatic network with the aim of further developing our medical and humanitarian programmes,” the Grand Chancellor told the crowded audience of the Order’s accredited ambassadors and diplomats.

He noted that the crises throughout the Mediterranean and Middle East demand an increasingly strong humanitarian presence and stressed the Order of Malta’s commitment to extend its outreach in the areas most affected by wars and violence, such as Syria and Iraq.

Boeselager restated the Order of Malta’s loyalty to Pope Francis and announced that, after the meeting, he would accompany the Lieutenant ad interim Fra’ Ludwig Hoffmann von Rumerstein to the Vatican to meet the new special delegate appointed by the Pope, Monsignor Giovanni Angelo Becciu.