Preventing deaths in the Mediterranean 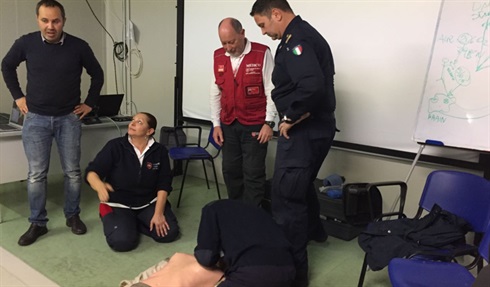 A training programme to prevent migrant deaths in the Mediterranean sea has just been launched with the international participation of the Order of Malta, Frontex (the European Border and Coast Guard Agency), the United Nations High Commissioner for Refugees and the International Organization for Migration.

The aim : to train naval personnel in Libya, which is the departure point of the boats overloaded with migrants, and so to prevent these tragic deaths and counter the criminal networks controlling human smuggling and trafficking.

In the first stage training, the Order of Malta participated in instructing 89 Libyans in ‘search and sea rescue’ on the Italian ‘San Giorgio’, as part of the European naval force operation EUNAVFOR MED Sophia.

The doctors of the Order of Malta’s Italian Relief Corps have assisted some 50,000 migrants arriving by sea on the Italian coast since 2008.