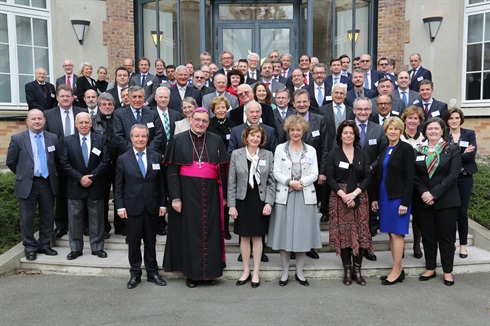 key themes were discussed by the 75 participants

The 25th annual meeting of senior healthcare ministers of the Order of Malta gathered this week in Paris for two days of intensive work, reviewing their 2016 programmes to help the poor and the sick in Europe, Asia and the Americas, and planning for the coming year.

75 participants representing 32 Order organisations and nationalities were welcomed by the President of the Order’s French Association, Thierry Beaumont-Beynac and the French Hospitaller, Yann Baggio, who hosted the occasion. The meeting was chaired by the Grand Hospitaller of the Order, Dominique de la Rochefoucauld-Montbel, who invited the group to share the knowledge and experience gained in their own sectors, so that all could benefit. Also in attendance were the Grand Chancellor of the Order, Albrecht Boeselager, and Monseigneur Jean Laffitte, the Order’s Prelate.

Key themes: the Order of Malta’s support for refugees and immigrants – from the country of origin, along the route to a new life, and in the host country on arrival. In Lebanon, the arrivals from Syria now make up almost a third of the population. They are referred to as Internally Displaced Persons and they are provided with shelter, medical and psycho-social care: it was noted that they cannot return to their home country because of the ongoing conflict there and thus the Order’s Lebanese Association, together with the international relief service of the Order, are providing as much support as possible – in a country which already has many resource problems.

A new initiative: the implementation of integration programmes, in particular in Austria, France and Germany. As well as providing basic medical care, these include offering language programmes to the recently arrived, after school support for the children, and help with obtaining the appropriate papers to remain in the host countries. The largest minority population in Europe is the Roma, or gypsies, for whom the Order of Malta has appointed an Ambassador at Large who is working with local Order organisations in a number of countries to assist with their integration into their local communities: special programmes are already underway in Romania, Albania and Slovakia.

Homelessness: remains of great concern across the region and many Order organisations reported on the growth in the number of homeless people attending their soup kitchens in, for example, Belgium, Britain, Spain, France, Switzerland and Russia.

Prison ministry:  On the other side of the world, Order members in the United States are focussing on prison ministry, giving support to those in prison, to their families, and to life after incarceration ends, providing social and psychological support and helping them resume their lives in society, services which are not provided by the state. The programme runs in 36 States.