Diplomatic relations opened between Germany and the Order of Malta 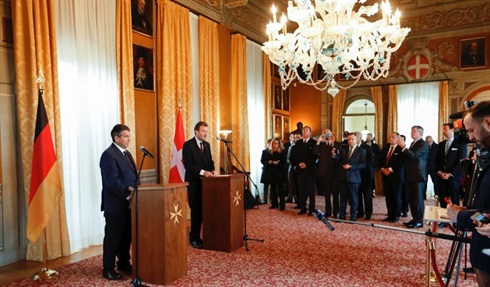 Official Visit of the German Foreign Minister,  Sigmar Gabriel, for the opening of diplomatic relations between Germany and the Order of MaltaEstablishment of diplomatic relations between the Federal Republic of Germany and the Sovereign Order of Malta was announced today. The German Foreign Minister, Sigmar Gabriel, was received on Official Visit in the Magistral Villa of the Order in Rome by the Grand Chancellor, Albrecht Boeselager.

“The excellent relationship between Germany and the Order of Malta has a long history. After the Second World War, volunteers of the Order played a vital role in alleviating the suffering of our people. The Order of Malta is one of the most stable institutions of German civil society with its hospitals, social and rescue services. Even internationally, during my many visits abroad to some of the most desperate places on the planet where the communities had lost hope, I met volunteers and staff from the Order of Malta,” said Minister Sigmar Gabriel during the press conference which followed.

“I would like to express my deep gratitude for the great work of the Federal Republic of Germany in relieving human suffering, particularly in helping migrants and refugees. It is an ambitious commitment that fully reflects the principles and values that inspire the activity of the Order of Malta,” said Grand Chancellor Albrecht Boeselager.

The excellent relations already existing between the Sovereign Order of Malta and the Federal Republic of Germany, together with numerous joint projects for tackling the crises and providing aid, especially in developing countries, will be further strengthened by the establishment of diplomatic relations and by the consequent exchange of ambassadors. For both Germany and the Order of Malta, respect for human dignity and the protection of communities in difficulty are the guiding principles for their common action.

The two delegations referred to the important contribution made by Malteser International, the Order of Malta’s Relief Agency, in offering assistance to refugees in some of the most difficult areas in the world, such as the regions around Syria, South Sudan and Myanmar. Also highlighted was the important migrant search and rescue activity in the Mediterranean Sea by the Order’s Italian Rescue Corps with their medical teams on board the Italian Navy’s vessels, as well as the Order of Malta’s decades of experience in Germany assisting and integrating migrants. There are currently over 5,000 volunteers working in 100 migrant shelters across the country.

Germany is the 107th State with which the Sovereign Order of Malta has diplomatic relations.