First World Day of the Poor

Pope Francis: “The poor are the true treasures of the Church” – 1,500 lunch at the Vatican 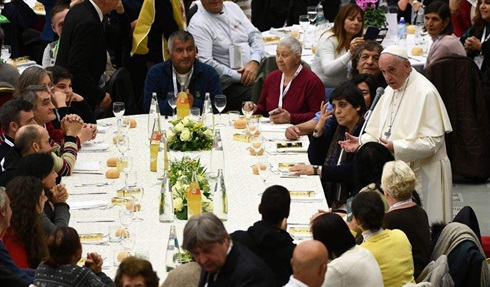 Pope Francis hosts lunch for 1,500 poor people in the Vatican

On Sunday 19 November the Catholic world marked the First World Day of the Poor, created by Pope Francis, to indicate the importance of the fight against poverty. His Holiness, who has declared that the poor are the true treasures of the Church, celebrated a Mass for 4,000 in St Peter’s Basilica and then hosted lunch for 1,500 of the very poor in the Paul VI Hall in the Vatican. They were served by 40 deacons and 150 volunteers from Rome parishes, amongst whom were many members and volunteers of the Order of Malta.

The Order’s Grand Hospitaller, in responding to the Holy Father’s call, circulated his message among the Order’s members and volunteers, noting that it would be observed around the Order’s world every year on this day, “living again the Order’s charism ‘Obsequium Pauperum’ – the global commitment in favour of people in need”.