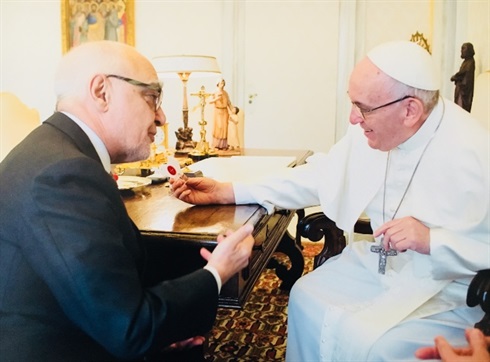 Pope Francis in discussions with Marwan Sehnaoui, President, Lebanese Association of the Order of MaltaMarwan Sehnaoui, President of the Order’s Lebanese Association, in audience with Pope Francis in the Vatican, discussed the current plight of Syrian refugees in Lebanon, and the Order’s support for them in its medico-social clinics around the country. Today, one in four people in Lebanon is a refugee and the strain on local infrastructure and economics is enormous*. Sehnaoui outlined the care provided in the Order’s 9 primary health care clinics and 4 mobile medical units and described a new project to improve the resilience of host communities and refugees in 28 villages around Baalbek. The first primary health care centre is already operational. Since the start of the Syrian crisis in 2011, the Order has cared for over 100,000 refugees.

Pope Francis and Marwan SehnaouiFrom the north to the south, social activities – care for the underprivileged, for the elderly and for disabled children, as well as summer and winter camps to provide holidays and respite care for the disabled – goes on all year round. *UNHCR, 7 Dec 2017