Pope Francis receives the Grand Master in Audience: “Go ahead with courage, you express spirituality through your works” 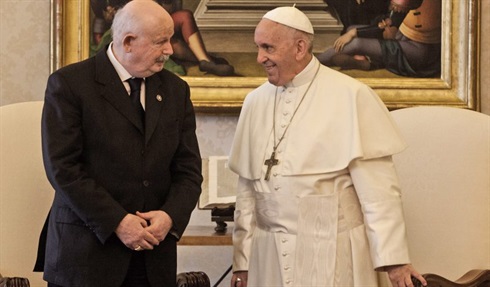 Among the many current works of the Order, Fra’Giacomo Dalla Torre spoke of the commitment to assist the thousands of refugees fleeing from wars and poverty along the Mediterranean Sea routes, and the search and rescue activities the Order of Malta’s Italian Relief Corps has been carrying out since 2008 on board the Italian authorities’ vessels.

His Holiness wanted to learn about developments in the Order’s projects in the Middle East and the Grand Master updated him on the work of the Holy Family Hospital in Bethlehem which, besides accepting premature or severely ill babies, recorded some 4,000 births in 2017. The Order also provides healthcare in the regions bordering Syria, such as Turkey, Iraq and Lebanon, where a hospital and ten health centres guarantee medical treatment to displaced persons.

There are also the ongoing projects in Sub-Saharan Africa where forgotten wars are being waged, and the Order’s ssistance to children, which was a central theme of the meeting, carried out in atmosphere of great courtesy.

Pope Francis urged the Order of Malta to “go ahead with courage” in its assistance activities, a testimony to the spirituality that animates its over 130,000 members, volunteers and operators in the service of the poor, the sick, the elderly and the marginalised in 120 countries.

Another topic discussed was the reform of the Order of Malta’s Constitutional Charter, launched in 2017 with the aim of giving the Order a structure of rules that will enable it to face the current and future humanitarian challenges in a rapidly changing world.