The Grand Priory of England 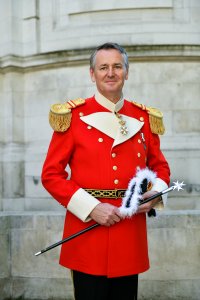 Currently, the Grand Priory is administered by its Procurator, Fra’ Max Rumney

There were English knights of the Hospital from the time of the First Crusade, long before the foundation of the English Langue in the early years of the fourteenth century. In the English Langue were knights from England, Wales, Scotland and Ireland. Around 1144, two priories were established, one for England, Wales and Scotland, and another for Ireland. The superior was the Prior at Clerkenwell, whose territory also included a commandery in Wales. The Prior of Ireland, whose grand commandery was at Kilmainham, came under Clerkenwell’s jurisdiction, though this was not always very effective as Irish brethren sometimes became involved in their country’s internal wars. Scotland had only one commandery, Torphichen, in Midlothian, whose incumbent was known as “Prior of Scotland,” though he was subordinate to Clerkenwell.

The Prior of England, “My Lord of Saint John’s,” given precedence before all lay barons, was an important figure in English life. Like the rest of the Order, the Grand Priory of England received a great accession of wealth and property when the Templars were suppressed in 1312.

In Scotland the Commander of Torphichen, the “Lord of Saint Johns” sat in Parliament until 1563. The heir of the last commander still sits in Parliament as Lord Torphichen.

In 1380, a Prior of England, Robert Hales, became Treasurer to Richard II. His poll tax proved unpopular, provoking the Peasants’ Revolt in 1381. Clerkenwell was burned and Robert was executed with the Archbishop of Canterbury by an angry mob.

Such events did little to diminish the Order’s prestige, however. The Peasant’s Revolt was all but forgotten when Henry VII was named “Protector of the Religion.” In 1517, Thomas Stanley, 2nd Earl of Derby, and Charles Somerset, 1st Earl of Worcester, were received into the Order as “knights of honour,” a grade which did not require a vow of profession.

In 1527, the Grand Master named Henry VIII “Protector of the Religion,” the title the Sovereign’s predecessor had accepted. But royal favour was not to survive the winds of the Reformation, and Henry dissolved the Grand Priory in 1540. Several prominent knights of Malta were executed between 1539 and 1541 for denying the Royal Supremacy: Thomas Dingley, Adrian Fortescue, and David Gunston. William Salisbury and John Forest died in prison.

Queen Mary revived the English Langue in 1557, and Clerkenwell was restored under the Grand Prior Thomas Tresham. The Virgin Queen was less sympathetic. In 1559, Elizabeth dismembered the Priory and seized its lands and assets.

Today, the gatehouse of the old Priory of Clerkenwell is the seat of the Most Venerable Order of St. John of Jerusalem in the British Realm, which purchased it during the nineteenth century. In 1963, the Order of Malta and the Venerable Order (the latter was founded by Royal Charter in 1888) signed a joint declaration of recognition and cooperation, though there exists no historical connection between the two orders.

Despite the Reformation and the consequent dissolution of the Grand Priory of England, there were always English, Scots or Irish knights of Malta. Until the end of the eighteenth century, most of the Englishmen and Irishmen tended to join the Italian Langue, while Scots usually joined the French Langues. Titular Grand Priors were appointed, together with titular Priors of Ireland and Bailiffs of Egle. The Order was not without recusant knights, but the last titular Grand Prior of England, Girolamo Laparelli, died in 1815.

Edward VII received the honorary cross of a Bailiff Grand Cross of the Order of Malta in 1882; he wore it during a visit to Malta after his accession to the throne.

The Sub Priory of the Blessed Adrian Fortescue was founded in 1972, with Lord Robert Crichton-Stuart as Regent. Subsequent Regents included Andrew Bertie (the Order’s Grand Master from 1988 to 2008), Viscount Furness, the Earl of Gainsborough, and Grand Master, Matthew Festing (2008 to 2017). In 1993, the Grand Priory of England was restored after being in abeyance for nearly 450 years except for titular Grand Priors.

The 56th Grand Prior of England, Frà Fredrik Crichton-Stuart, succeeded Frà Matthew Festing, on his election as Grand Master of the Order, in 2008 and held the position until his death on 14 June 2011. The 57th Grand Prior, Ian Scott, was installed on 13 October 2011 and retired in 2019. Currently, the Grand Priory is administered by its Procurator, Fra’ Max Rumney.